I was taking a picture of myself yesterday with one of Tori Amos' album in order to upload it so I can be part of the big mosaic made of fan pictures, anyway, this is how my picture came out 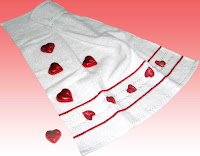 Because we believe that love is the last to have its say, Anta Akhi offers with the coming of Saint Valentine's holiday, a white towel embroidered in red (35 x 50 cm) with a small package of delicious chocolate from SeSoBel.

This nice package will be delivered to you in only 15,000 LL.

A small participation from you end will help us face the economic crisis that has landed on our home and our handicapped youth.

For your orders, please contact Chantal by email on antaakhi@inco.com.lb or by phone 04.408890.

Thank you for everything.
Posted by Liliane at 1:01 PM 4 comments:

Merci pour tout!
Posted by Liliane at 12:57 PM No comments:

Would love to see Norah Jones in Concert one day.

Email ThisBlogThis!Share to TwitterShare to FacebookShare to Pinterest
Labels: Music

During lunch break, 2 of my colleagues informed me that they are going to ABC mall in Ashrafieh to check the 50% sales. So Yippeeeeee, I went with them. But of course, for those who are not familiar with the Sale in Lebanon, it is usually a slightly more complicated formula. In general a sale is on an Item's price which is X, if it is 30%, the final price F will be:
F = X x (100 - 30) / 100

Got it? Okay for those who don't like math, first they increase the original price X to Y, then they do a sale on Y and not on X. So eventually the 30% is not really a 30%, it's much less!

Anyway, I went to Aizone, I only go there when I am with my friends and THEY want to buy anything. I don't like paying much for clothes just because they are branded and their quality is not really the best quality in the world. I saw a Coat, leather coat, it is something I might wear, long, beige, so I looked at the price, something I instinctevily do, being poor and stuff. At first I thought it was 386'000 LL, "a bit expensive but maybe worth it", I reflected, but to my surprise (and I almost fainted), there was a 4th Zero, it was actually 3'860'000 LL, which is a bit more than 2'500 US$.

Conclusion: it is actually cheaper to travel to Turkey, get a real leather coat and come back!
Posted by Liliane at 4:16 PM 14 comments:

38 ways to win an argument

38 ways to win an argument, or a more eloquent description of the matter, "The Art of Controversy". Surprisingly, while reading these ways on this link I have come to realize that I among many other close and distant persons use some of these ways, the more instinctive ones. I bet the husband is pretty familiar with #38. It's a pretty effective method, just make it person and get angry, now who can argue with you anymore. However, this method cannot be used with just everyone, so if you're having an argument with your boss for example, maybe #37 can save your day.

So again, if you're interested in learning or increasing your knowledge in the Art of Controversy, which can be reffered to in slang language as "Kickin' Yo Ass!", just click here.
Posted by Liliane at 2:41 PM No comments:

Email ThisBlogThis!Share to TwitterShare to FacebookShare to Pinterest
Labels: article

I recently learned that a lot of students give up on their Thesis. It's kind of good news, as I have been beating myself up for being so late with it. However I don't plan to give it up, although I felt sometimes, that this is one thing I won't be able to do.

What's the secret though? Why most people go all the way, and then drop it all when the Thesis comes? What is this feeling we have? Apparently it's a universal thing.

For one, I spent a good bunch of money which I worked hard earning on it, and second of all, if I give it up, then I will be ... giving up!

Once you give up on one thing, then you will do it on another and another...

The scary thing is that how much a person changes and how much his principles and beliefs change! High school days, university days and even while I was still studying the MS courses, I had one goal in mind, PhD! Now it's no longer my goal.

Once again, we are sucked in the slavery machine of this world with all its judgements and labels and rankings. I refuse this. However I don't like to stop something because I cannot do it, I only stop when I know I can do it but don't find its use anymore. At this point, I have doubts that I can finish my thesis, and this is why I am not stopping. I am not quitting.

I just can't find myself sitting on my pc and working like hell, how have I grown so lazy? I know I was never much of an A student or a study-lover, but I know I had potential and I could deliver when I want to. However seems like there's something wrong with my brains lately. Or could it be my full time job, my boring job, my dead end job, seeing that Computer Science was never really what I wanted to do, and uptill today I don't have a clear idea of what I should've done! Take me back 8 years and I still don't know which major to pick.

At the same time, if I had majored in something else, I would have went crazy if I didn't know how to program and develop a website! Talk about stupid dilemma!

I will stop here, I think if I keep writing I will end up writing a novel which will be worth nothing. Or maybe I could sell it and become rich?
Posted by Liliane at 6:45 PM 9 comments:

Borat Under the Hammer

The Naughty Borat has got himself into trouble, so many victims of his movie, where they either fell victim to Borat, or after the movie came out, they paid the price of falling his victim, as they let out some honest thoughts (such as racism and sexism) during the footage, are now thinking of sueing or are sueing Borat!

The most unfortunate one was Dharma Arthur, the TV producer who allowed Borat to appear on her show, lost her job, and couldn't find one for 3 months!

I bet COCO is ecstatic to hear this news!
Posted by Liliane at 10:00 AM 6 comments:

January 24th the most depressing day

It is official. January 24th is the most depressing day of the year according to research by Cardiff University. In the aftermath of the festive period, January has long been regarded as the darkest of months as most employees return to work feeling de-motivated and sluggish.

Reading those Jobs related articles every now and then is a thrill. Because I get to see that I am not hallucinating and job related depression exists! They usually deal with psychological issues we go through as job people, routine people, 9 to 5 people (although I start at 8:30 am and stay till 6,7,8,9...), boring and bored people.

I know that most people feel this way, and I should suck it up. However I am not happy so I am not easily going to be able to "cope with it" or "accept it" or "live with it", because if I do, I will be bidding farewell for any potential dream coming true, and definitely for my creativity.

Every day, my motivation, creativity, hopes and dreams die a little bit. What will I become after a couple of year?
What good am I this way to people I love or potential people I might be able to help?

That Cardiff University is wrong, January 24th is not the most depressing day, today is, and yesterday, and tomorrow!
Posted by Liliane at 9:23 AM 4 comments:

First, I had thought the whole wintertime blues was only something of my own imagination. I always thought of the reason why I get so depressed during winter, especially January and February. And apparently it is true. Anyway, they have some kind of a cure, which is called Dawn simulator. There is something even called SAD - seasonal affective disorder.

Anyway I usually turn on the lights when I wake up, but this isn't really working anymore, because the curtains on my balcony are closed and I don't get any sun-light in the morning, this is probably why I can't get out of bed.

With bright light therapy, SAD sufferers sit at a bright light box for 30 minutes at breakfast time. Dawn simulation and negative air ionization are more convenient, being delivered automatically and innocuously during the final hours of sleep by an apparatus placed next to the bed.

Although the sunrise pulse treatment was "therapeutically active" in some patients, it led to the persistence, emergence and exacerbation of depressive symptoms, making it an "unfavorable option," the Termans write.

I saw Borat 2 days ago, and it cracked me up. I barely smile, and rarely laugh. But Borat made me laugh more than 1 time. Sacha Baron Cohen did a great job being and creating the Borat character just as he did with Ali G. The first half was hilarious, although it got a bit weird for me, when Borat and his producer Azamat were running after each other, completely nude.
However, I give it an 8.5/10. Especially because there has been many scenes that are real footage and not acting, and sometimes it is hard to tell which is which.
After a couple of minutes since Azamat started having lines in the movie, I found the language familiar, but was focusing on the english translation so I didn't pick it up. Suddenly, I realized it was Aremnian, a language I hear very often and fairly understand. Yes Azamat, the Kazakhastanian producer was speaking Aremnian, and I suspected Borat was just babbling by using the "KH" pronounciation very often.
Finally, if you haven't seen the movie, go see it, it's a funny one, crazy, very well directed and shot (again with the whole real footage).
P.S. When Borat puts a sac on Pamela Anderson, I think this was real!
Borat deserves the whole fuss that had!
Posted by Liliane at 2:20 PM 11 comments: