And here is how my day started

While driving to work my stomach started hurting badly I even worried how am I going to even get out of the car and walk to the office, then I felt that am coming down on diarrhea, and I also wondered how am I going to make it to the bathroom, I was so much in pain. Anyway I went straight to the bathroom carrying my lunch box and bag, didn't even pass by the office. Later I felt extremely nauseous the kind where you feel you're going to throw up your soul, I hated it, I unlocked the door in case something happens to me someone would find me, but thanks to my OCD I knew that won't be before an hour till someone actually uses the bathroom in the morning, so I stormed outside with what strength was left in me, and as I opened the 4th door (yes that many doors!) I knew this is it, and bam I hit the floor and the first point of impact was my chin, now it's bumpy. 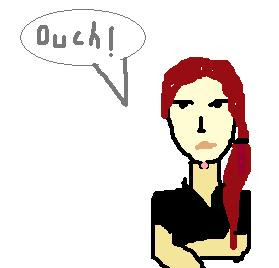 I don't know if I fainted or not, but I woke up on my own but wasn't able to move. Someone found me, called the security, who called a coworker and they all my colleagues were around me (thankfully they saw me on a chair and not on the floor like a complete idiot)... I hate looking so weak and my blouse was very wet, I was sweating so much...

Something like that happened to me 3 months ago but without the fainting yet with same amount of pain, so I think I need to have my blood tested, this is getting ridiculous.

So my boss and a colleague dropped me and my car back home, and I had a gift with me for my boss as it was boss' day, I gave it to him.

Have a grrrrreat weekend everyone! Mine started early :) bumpy but am better now.
Posted by Liliane at 9:00 AM